This weekend’s project is a small art deco dancing nude lamp (lamp is circa 1910-1920). The figure could be cast iron, plated in copper (by the looks of it) – but, I’m no expert, all I can tell you it’s solid, metal and old. and definitely has a copper finish. That’s not very helpful but I don’t have access to a testing kit and *shrug* I wasn’t really fussed about it either.  I just wanted it to come home with me.

I brought the lamp base from a swap meet dealer at the Kumeu Hot Rod Festival this weekend, for $30 – marked down from $50. The lamp was heavy old and filthy with black grime, but had that little sparkle that I couldn’t resist. I couldn’t leave it there surrounded by old rusty oily car parts and other unloved vintage paraphernalia – that would be a crime.

The dealer said he had brought her back from the UK a number of years ago – fuelled by the best intentions that went unfulfilled. He also remarked the only thing he knew about the piece was that it was old, heavy and was unsure if it even worked at all. The wires were cut and he mentioned it would need a new flange to support a light shade as the fittings were different to what we used in NZ.

I spent the rest of the afternoon at home  dismantling the piece, checking and cleaning the fittings and rewiring the lamp.

Here is the process

First thing I did was check my art room for bits and bobs. I had an art deco mint coloured glass shade and some extra brass fittings that I would need to use if I wanted to use the shade. The original fitting is much larger than a normal fitting and wont support the modern threaded washers or shades that we now are accustomed too.

So, I dismantled the lamp and check all the pieces. The little pull switch was built into the fitting, the condition was excellent and every point and connection looked uncompromised. I spent ages marvelling at the intricacy of the mechanics of this simple switch – really clever, but I pity the manufacturers that had to put them together.

I cut the wires when I removed it from the lamp, but I left about 1cm of wire attached to the screws so I knew which coloured wire went where for reassemble.

The size of the fittings was an obvious difference and it was clear there would be a compromise  between the lampshade with a regular switch or the original monster fitting with the pull switch.

I dismantled the extra brass fittings – which were bayonet as opposed to the original screw in fitting ………. and this fitting had signs of a burn out and the points were indistinguishable. So – the decision to go with the pull switch and original fitting was confirmed and this fitting was tossed into the bin… it’s a small pity but the lampshade will have to head back into storage and wait for another day.

On closer inspection of the original lamp bits I noticed very faint stamp marks, most written upside down  – one for Edison General Electric Company, one saying ‘press’ and one for ARROW, made in USA. Which makes me think this lamp may not be British at all. There are also a very, very faint set of numbers I can’t really make them out to distinguish what they say. The fact the stamps are upside down indicate that these fittings were not made for this piece, but were potentially recycled, or added. They were most probably destined for a residential ceiling fixture, or wall mount.

This fitting is really fascinating so I did a little research. The web tells me that this light fitting is new and improved version of the Hubble Lange design of the early 20th century and referred to as a

with beaded shell and removable chain guide, in production from 1909 to 1916

Next step involved rewiring, this is where a little recycling trick comes in handy.

Unfortunately, I had used up my saved vacuum cleaner cords on other lamp projects. So instead of spending a small fortune buying all the necessary bits individually – a thrifty trick is to source or buy a small extension cord and this is what I did.

All you do is cut one end off, strip it back very carefully. You don’t want to nick any of the wires and expose the copper inside.

Cut the earth wire short to about 1 cm. If you have a vacuum cord you wont have an earth wire to contend with.

Feed the wires up through the lamp and strip the ends.

Reconnect as per next pictures……… They are self-explanatory.

Time to reassemble the fittings. It even has it’s original cardboard insulation sleeve, and it looks as new as the day it would have been assembled.

Time for the finishing touches – give it a little light clean and source a light bulb.

I chose to go a little ‘Edison’-industrial-look with this lamp and alleviate the issue of being unable to use a shade. The fittings are so beautiful why hide them away!

Here is what one of the first Edison appliances looked like and I love the raw uncompromising style of the carbon filament in the lights and the slight element of danger that the fan has.  🙂 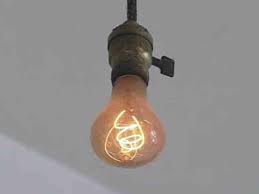 It’s amazing how things have changed in this eco-green challenged and safety-crazy world of ours. It’s good to reflect on the path that we’ve come.

I chose to make a feature of the gorgeous antique fitting and accentuate it with a modern oversized vintage inspired bulb.

I chose a G125 Dolly Bulb (12.5cm across, also referred to as a globe bulb) with carbon filament it has a very slight smokey colour to the bulb glass and brass base, This bulb is 240V/40W – Perfect for that very important vintage look but not too expensive to run. The cost of this speciality bulb (ouch) was as much as I had paid for the lamp at $29.90. But it was seriously worth every cent.

I did a bit of research to see what this would potentially be worth – and really to ensure I didn’t over capitalise on this project. Here is what I found:

Condition was original and the piece is circa 1920’s. Not sure if in working order.

Holy moly, really? This one has key differences which I think is not very appealing – the base appears to be cut and the cord runs exposed up the back and through the bust of the figure, into which the lamp fitting is screwed. This version I would think is older than mine. Mine seems to be a little more refined, with more thought put into the construction. But it has me wondering how I can get my hands on some woven vintage look wiring……. for a more authentic look.

Here are some book ends notice the change of base shape.

The production of these art deco ladies (scarf dancers) must have been prolific, – above is a pair for $250US that have been made into what looks like bookends (this image is from Thriftaholic – She has an AMAZING BLOG)… These ladies are most definitely from the same mould for the figure as my lamp, but a different die has been used on the base. and, below are another pair of bookends for $350US on EBAY

These ladies are EVERYWHERE (well in the States at least)!!!!!! All are dated circa 1910-1920 and must be the original flapper for sure!!

A little more digging shows –  the original patent for this scarf dancer (and other scarf ladies) design was owned by Cowan Pottery in the 1920’s for production of flower frogs in ceramic. One ceramic example is exhibited in the Cowan Pottery museum in Ohio, USA. Cowan Pottery operated from 1912 – 1931 when the company went bankrupt. The Cowan scarf dancer designs were so popular that they were often imitated all over the world during the 20’s. Forcing Cowan to take the unusual move of filing for patents on the designs to protect his interests.  There is record in a book by Mark Basset of a 1927’s advertisement for this scarf dancer design replicas in metal being produced or manufactured by or for George C. Kindt and Co, New York. – I have not been able to trace any further information to support this.

So, at the cash register – this little project rang up??

$7 for the 3 metre extension cord

$30 for the specialty bulb

If I saw this in an antique, or designer interior shop I would comfortably WANT to pay between $300 – $500.

Although, If that US Auction gives a realistic estimation to go by – I would expect a sale tag of approx $700NZ – $1100NZ, which is totally out of my price range – I wouldn’t even be able to afford standing outside the window gazing obsessively at it.

So all in all, I think I did alright and I am so pleased with my lovely little lady. In the future I might source some fabric wrapped cord for a more authentic look, the more I think about it the more I want it…….. But for now I will just enjoy it for it’s beauty.

Let me know what you think? Cancel reply

This site uses Akismet to reduce spam. Learn how your comment data is processed.

I am an artist and designer (PEPPERMIA.x) and my hubby is a carpenter/joiner. As a team we've been experimenting with restoration of furniture and designing and building interesting interior pieces.

We are interested in the concept of self-sufficiency and green technologies and this is what we base our designs on.

We do all of these things - and blog about them, come join us on our journey!!

Looking for something specific??

RSS – link me to get updates